It’s June 6th--Russian Language Day! If you let it slip from your calendar, not to worry! Underpass has you covered. While it might seem like Russian and English are completely separate languages, you probably use words with Slavic origins every day. Don’t believe us? Check out this list of everyday English words with Slavic origins. All information was gathered from the Online Etymology Dictionary. Здоровья!*

Vampire: Believed to have originated from the Old Church Slavonic opiri, which in 1734, spread to multiple Slavic languages: Serbian vampir; Bulgarian vapir; Ukranian uper. Slavic linguist Franc Miklošič determined that the word originated from the Kazan Tatar ubyr, meaning "witch," though this point is contested by other linguists.

Mammoth: First used in English in 1706, the word for our historical woolly friends came from the Russian маммоть (mammot’), which itself probably came from the Finno-Ugric language Ostyak. The Finnish word for “earth” is “maa,” which makes sense, since mammoths were dug from the earth. In fact, people originally believed that mammoths were earth-dwelling animals, like moles, because their remains were only found underground. 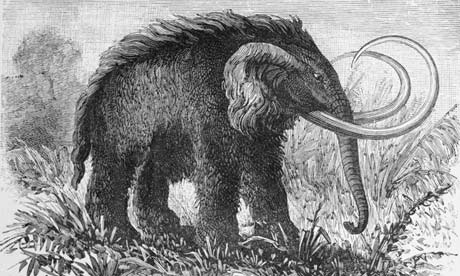 A mammoth, probably enjoying life on the Eurasian Steppe.

Robot: This word originated from a play 1920 play "R.U.R." ("Rossum's Universal Robots"), by the Czech author Karel Capek. The word came from the Czech robotnik, or "slave." Here are some other Czech derivations: robota "forced labor, compulsory service, drudgery," from robotiti "to work, drudge." The Czech word, moreover, most likely came from the Old Church Slavonic работа (rabota), or "servitude." Today, the word работа in Russian means simply “job,” which lends a particularly Orwellian shadow over the modern-day workforce.

Slave: There are many differing origins to this word, so it’s a bit tricky. There’s the Old French esclave, which dates back to the 13th century, as well as the Medieval Latin Sclavus, which spread to the other Romance languages. In fact, because Otto the Great and his successors conquered and enslaved so many Slavic people, the word “Slavic” is actually derived from Sclavus. To bring this full circle, the Russian word for slave is actually раб (rab), which originated from the Old Church Slavonic рабу (rabu). Does rab sound familiar at all? It should--it’s actually the origin of robot.

So spread these tidbits around. And happy Russian Language Day! Celebrate by reading your favorite Chekhov play (if you can choose).

*“To your health!” A popular saying akin to the English “Cheers”; Pronounced “zda-ROV-ya.”